Winner of the 2016 Gold Quill award for best adult fiction from the League of Utah Writers.

Clara, Reed, Trudi, and Joseph are young, optimistic college students just beginning to learn about life and love. But when the U.S. enters the Great War in 1917, their lives are forever changed. They soon find themselves in different parts of the world fighting in the war effort. But amid the horrors of war, can they stay true to who they are? This novel weaves real events with compelling fictional characters into a sweeping tale of war, romance, self-discovery, and sacrifice.

Available at Amazon, Barnes and Noble, Deseret Book, and many independent book stores, or add it on Goodreads.

Reed stood facing his platoon, rigid at attention, the curve of his officer’s bamboo cane pinned at his hip, the tip touching his right collarbone like a saber. He stood composed, his back to the Germans waiting to kill him.

The men fell into formation quickly, the rows dressed under the cold eyes of Gunnery Sergeant Allen. If they were to die, they’d do so in straight lines. They faced Reed, their aught-threes at shoulder arms, rigid, waiting for the call.

Sergeant Allen took his position, gave Reed a slight nod, and Reed executed his best about face, towards the wheat field, just 600 yards to the edge of Belleau Wood, and the Boche.

It was as if he were completely alone. Desperate to see his fellow officers on his left or right, he un-caged his eyes without moving his head but could see no one with his peripheral vision, no comrade with whom to march forward. An officer leads from the front.

He slid his left hand along his trouser seam up to his chest to grip the whistle lanyard, then the whistle itself, hoping he could blow it when the time came. He knew the other men were terrified too, he could hear soft prayers behind him. Not the words, but the rhythms, the meter.

The march from the assembly area had surely not helped their morale. It seemed like every human being capable of travel was heading the other direction. Everyone except the U.S. Marines. 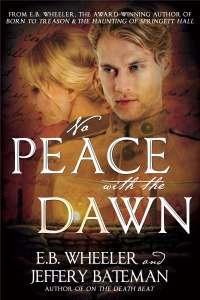 Hawthorn trees are among the most magical in European folklore – and also the most conflicting. Good luck or bad luck? Friend or foe? It depends on who you ask and when.

Mysteries of the Old West

I’ve been working on this project for a long time, and I’m excited that it’s finally in the world. I love history, and I love real-life mysteries, so I’ve combined them in a book for ages 10 and up. It’s appropriate for tweens, but my adult readers have enjoyed it as well. Lost treasures, missing […]

It’s been just over two years since the pandemic shut down our lives and caused all of us some level of trauma. I went into 2020 working on a series of books set in WWI, which is a time period I find very interesting, but as school moved online, lockdowns disrupted our plans, and stores ran […]

Guardians and Wards: A Medieval Practice that Lingers Today

Wardships were an abusive medieval practice that we haven’t yet left in the past.

A Merry Christmas with the Mari Lwyd

If a horse skull comes carolling to you this holiday season, don’t worry – it’s only the Mari Lwyd.